Evaluation of the effects of climate change to water demand for agriculture in Da Lat city, Lam Dong province

The Scientific and Practical Foundations for Sustainable Development and Climate Change Response in Mekong Delta, Vietnam

The Clean Development Mechanism (CDM) Procedure and Implementation in Vietnam

Power Dissipation Index of Tropical Cyclones in the East Sea 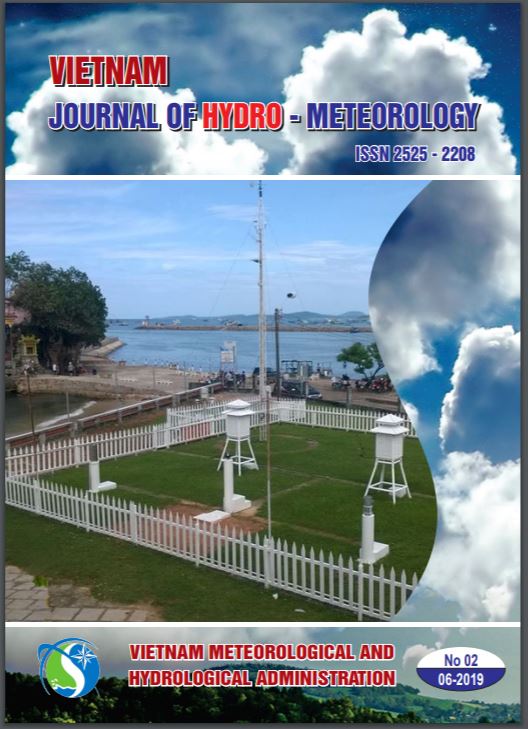 No.225/GP-BTTTT - issued by Ministry of Information and Communications of the Socialist republic of Vietnam on 08th, June 2015.

1. Guidelines for the authors

2. Lookup list of indexes of Vietnam Journal of Hydrometeorology

These indexes are referred to some materials as follow:

The history and development of Vietnam Journal of Hydrometeorology

About 2 years after the peace were restored in the North, the Internal newspaper of  Hydrometeorology, the predecessor of Vietnam Journal of Hydrometeorology, was first published on April 20, 1956 by Director of Meteorological Department Dr. Nguyen Xien is the Editor-In-Chief.

At that time, the content of Internal newspaper was mainly to exchange professional experience, to encourage the enthusiasm and dedication of the observers at hydrometeorological stations in areas, especially in highland and mountainous areas.

The circulation of the Internal newspaper was limited, mainly for experts, internal readers and a number of governmental agencies. The layout of the newspaper was still sketchy, used Rônêô printer, and the range of pages was from 20 to 30.

Although the circulation was insignificant, the published articles were very diverse, showing the development and the overall picture of the Meteorological Department and from many stations. The Internal newspaper was issued regularly from Vol. 1 (April 20, 1956) to Vol. 15 (October 13, 1958), and the publication was temporarily suspended due to the changes in organizational structure.

In 1960, because of the development and diversification of information technology, the need of information exchanges and cooperation in the world, the Internal Meteorological Physics Journal was republished. The journal included professional translations of international research for experts and staff to have a better understanding of the field. However, due to limited physical conditions and translation capacity, the journal was only able to publish for one year.

In the early 1985, the journal changed its name to the Meteorological-Scientific and Technical Journal. After the country’s renovation in 1986, the volume of published information in the Journal increased significantly, the number of pages and circulation also increased to serve more readers. In June 1989, the journal special edition was published to cover the situation of hydrometeorology in 40 typical stations nationwide. The circulation was once a month, with the total of over 500, each of 50 pages.

October 13, 1998 had marked a milestone when the journal was renamed to Vietnam Journal of Hydrometeorology.

The Scientific and Practical Foundations for Sustainable Development and Climate Change Response in Mekong Delta, Vietnam